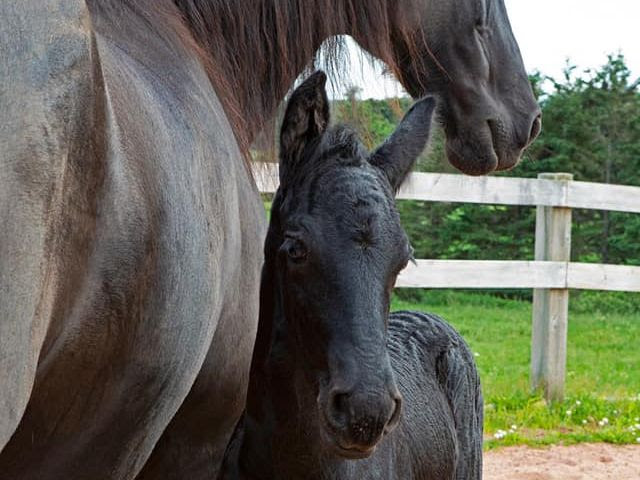 Low-kinship breeding features prominently in the spotlight. In our endeavours to breed a healthy Friesian horse, low kinship seems to be the obvious choice. In addition to low-kinship stallions, low-kinship mares can also make a contribution towards more outcrossing. In early May the KFPS sent an online questionnaire to about 1000 owners of mares with a kinship of 16.9% or lower. From these 1000 owners there were 600 people in the Netherlands and 400 in foreign countries.

Great involvement
The response to the questionnaire was considerable. About 43% of owners responded. The vast majority (84-90%) was aware of having a low-kinship mare in their yard. From these, about 75% do actually use their mare for breeding and 85-89% take the kinship of the stallion of their choice into consideration. The outcome from the Dutch breeders and those in the foreign countries is virtually the same. Something the foreign breeders also mentioned is the fact that the specific (low-kinship) stallion of their choice is not always available, not even by frozen semen. ‘For us stallion choices are limited’, one of the foreign breeders pointed out. The tip offered by the foreign breeders is that their own lesser-kinship bloodlines and the use of (Foal)book stallions do provide opportunities for injecting new blood.

Active communication
The question if the KFPS could play a role in their breeding was answered in the affirmative by nearly 70% of the respondents, saying any help would be welcome. For example by giving advice when choosing a stallion. The foreign-country respondents remarkably often mentioned the transfer of knowledge for successfully impregnating mares with frozen semen. These breeders would also like the Studbook to play a role in the export/import of frozen semen. Both foreign and Dutch members expressed they are always on the lookout for more knowledge and experiences concerning kinship and stallion choices.

Crossing with other breeds yes or no?
Many of the respondents had given due thought to the matter of kinship in the population of Friesian horses. ‘Putting more focus on low kinship implies we have to make allowances for exterior and movement.’ Several people specifically mentioned crossing with other breeds to be an option. ‘That instantly helps to reduce kinship.’ Others however, pointed out they would ‘never consider crossing with other breeds’. They prefer to ‘keep looking for low-kinship stallions, and accept that progress is going to take longer.’ And: ‘Look for B-Book stallions.’