How to nominate a Hall of Fame Candidate

“Induction into the FHANA Hall of Fame is the highest honor that can be bestowed on a member of the Friesian Horse Association of North America. It is reserved to FHANA members that have, through personal or economic sacrifice, put the Association before their personal or economic gain. In honoring these individuals we recognize the members that have contributed unselfishly to an Association that is the primary guardian for the KFPS Friesian Horse in North America. Their induction into the FHANA Hall of Fame will forever memorialize their contributions to FHANA and the KFPS Friesian Horse.”
With those words being spoken at the 25th Anniversary Convention Banquet, the FHANA Hall of Fame was opened. The 2008-2009 FHANA Board of Directors undertook the challenge of developing the Hall of Fame to pay homage to the members that came before us, whose foresight developed an Association that we, twenty-five years later, continue to enjoy and reap the benefits of their collective wisdom.
The initial induction of nine members include many of our founders and individuals that have unselfishly contributed over the past years, but this group in by no means all inclusive, there are many members whose contributions must be recognized. Following is the criteria for induction in to the FHANA Hall of Fame. The induction process includes many steps, in this way candidates are placed into nomination and approved on several levels to insure that we only place the most worthy individuals into the Hall.

The Process of Induction
1- Inductees can only be nominated through an affiliated FHANA Chapter. For a Chapter to nominate a potential inductee a vote must be taken by the chapter and pass by a 66% plurality of the voting members voting in favor of induction (Minimum: fifteen members voting).
2- Upon successful nomination at the Chapter level, nomination papers along with a biography of the candidate should be submitted to the FHANA office for review and approval by the Current FHANA Board of Directors. Board approval is done by ballot with a minimum of five current Board members voting in favor of Induction. The FHANA Board President is eligible to vote in this election.
3- After approval by the current FHANA Board of Directors, the candidate’s name, along with their individual biography will be placed on a ballot to be voted on by all FHANA Chapter Presidents. Chapter Presidents are encouraged to acquire feedback from their individual chapter members to vote along the wishes of their respective chapters. The vote of Chapter Presidents will also require a 66% plurality in favor of induction to induct a candidate into the Hall of Fame.
4- If a candidate fails to gain approval per paragraph three after five attempts at induction, his or her name will no longer be accepted for nomination through Chapter President approval process.
5- After the opportunities per paragraph four have been exhausted, living members of the Hall of Fame can be petitioned to vote for a Hall of Fame candidate in a special election. This vote will require a 66% plurality voting in favor of induction by living Hall of Fame members for induction.
6- If petitioning is pursued per paragraph five, the completed petition must be forwarded to the FHANA office with twenty-five (25) active FHANA Members signatures to be considered for a Hall of Fame Members vote.
7- Candidates can only be placed into nomination once per calendar year.
8- Nominations must be received by September 1 of each year.
9- Chapter President Hall of Fame voting will be held from October 1 thru November 30 of the same year as nomination.
10- Ballot counting will be performed by a FHANA Board Member, witnessed by a FHANA member and verified by a second FHANA Board member.
11- Election to the Hall of Fame will be announced in January of the following year.
12- A maximum of three candidates only will be inducted in the FHANA Hall of Fame in one calendar year.
13- The Induction will be done during either a FHANA Convention or the FHANA Annual General Meeting.

Over the last 25 years, Klaas has proven his dedication to the organization by finding time from his busy schedule as a veterinary doctor to contribute for many years as a part of FHANA committees and faithfully attend many of FHANA and the KFPS’s primary meetings. Klaas has attended almost all of FHANA’s official AGMs and has not missed one Stallion Show in Leeuwarden in the last 20 years. He is also an avid attendee of the 1st Viewing of the young stallions in The Netherlands. Klaas was also instrumental in organizing the Alberta Friesian Horse Association and has served as their President for many years in its early history. Over the years, FHANA has benefited greatly from Klaas’s dedication to all things Friesian horses, whether it was the health of our black beauties, his local FHANA chapter, our North American organization, or the KFPS internationally. But most of all, Klaas has proven himself to be consistently a kind and friendly ambassador of our beloved Friesians for the past 35 years. 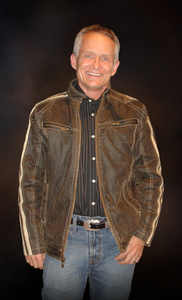 Scott honorably served on the FHANA Board for six years. The results of his leadership and collaborations throughout his tenure on and off the board includes but is not limited to: right sizing the FHANA office resulting in improved efficiency and quality; the development of the FHANA Hall of Fame; and the planning and implementation of an incredibly successful FHANA 25th Anniversary Convention, the largest confluence of KFPS Friesian horses in history! In addition, Scott’s contributions has resulted in the development of a fhana.com website.; new by-laws; the 2010-2011 Breeders List that has been distributed internationally; marketing programs that promote the KFPS Friesian horse; and the development of the “In Memoriam” and “Accomplishments” sections in “The Friesian” magazine. Scott is actively working on the FHANA magazine, ensuring the publication is relevant and provides value to all. While on the FHANA Board, Scott dedicated his time and energy to multiple working committees including but not limited to: the Keuring, Marketing, Finance, Strategic Planning, Ethics and the 25th Anniversary Convention committees. In addition, Scott, in collaboration with a FHANA member, instituted the Friesian Member Council (FMC) with the goals to increase chapter engagement, to enhance member satisfaction, and to develop a bi-directional communication link between FHANA chapters and the Board 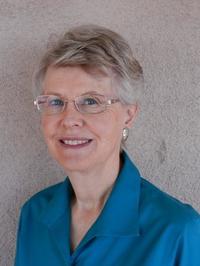 Judi Knapp has been a pioneeer to FHANA in many different aspects. But most importantly she saw the need for putting structure into the rapidly growing FHANA organization. Judi developed the first official Rules & Regulations, she performed the administrative and record keeping for FHANA out of her own house, and was instrumental in getting the Friesian magazine started where she served as Editor in Chief until Laurie Kasperek took over the publication. Judi was also one of the key personnel in organizing and promoting the Friesian Extravaganza in 2000 which set the stage for additional events in 2001 and 2004. Judi was also heavily involved in the 25th Anniversary Event in Reno, NV. Judi was instrumental in helping FHANA grown from a local “Club” atmosphere to an international based organization it is today. 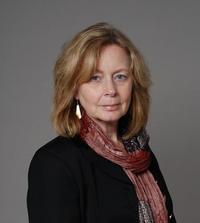 Laurie’s list of contributions are remarkable. Thankfully her main focus has been the education of FHANA members as our Association grew exponentially for the last fifteen years. We believe that Laurie educated more FHANA members on this complicated breed than any other individual in our Association. As editor of The Friesian Magazine she has worked tirelessly to produce the “bible” for Friesian enthusiasts in North America. Her countless contributions to The Friesian taught all of us on the challenges involves with Friesian horses. As a member, Laurie helped in starting the Education Committee in 1998. She bacame editor of The Friesian Magazine in 2002. From that point she became the central educator of our Association. Laurie is currently an active member on the FHANA Health Committee. 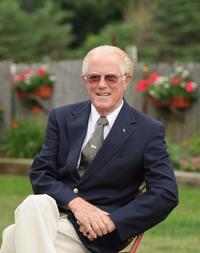 In 1989, the FHANA was having a very difficult time. FHANA almost had a split, but Fred kept it all together. At that time the Association’s office was moved from California to Michigan, and all the records could fit in a few shoeboxes. In Michigan Fred had a secretary and he put all the records on computers. The Holland FPS did not have computers at the time, so there were some growing pains in the organization, but grow the organization did. 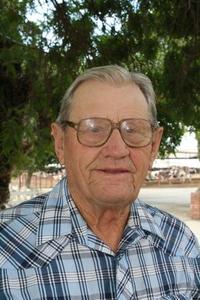 As a collector of antique carriages, a yearly participant in the Rose Parade, a dignitary amoung Friesian horse breeders and a successful dairyman, Frank Leyendekker has a record of accomplishments that is difficult to match. He was not only the first president of FHANA, but through him, America has grown to appreciate the beauty and majesty of the Friesian horse, and the importance of keeping the breed pure. It is a legacy that deserves the highest honor and respect.

Pier served on the FHANA board three years, during a time of great changes in the FHANA organization. His main goal was to get the 70-Day Stallion Testing performed in North America, so stallion-prospects would not have to be shipped to The Netherlands to have a chance of full approval, so our stallions would be on an equal footing with those in the Netherlands, including the privilege to ship semen worldwide. This was finally accomplished with the FHANA and KFPS approval of the DG Bar Ranch as a testing site in 2006. Unfortunately, that first year the group of stallions chosen all fell out of the testing qualifications. So the first testing began under the supervision of Willy Arts of DG Bar in December 2007. 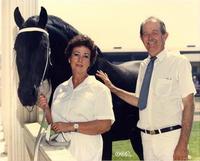 Anita and John discovered Friesian horses at the same time, in 1981, at a Tom Ryder carriage driving clinic in Pomona,CS. Jerry Dunton was driving a pair to a beautiful carriage; the horses and turnout made a memorble impression. Anita and John decided North America could use another qualified stallion and went to Friesland to see what was available. Frans 289 was sold a few hours before they made an offer, so they went home without a stallion. The next thing John knew was Sander 269 was on the next KLM plane for North America. 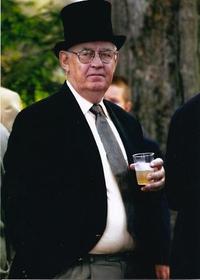 So what about Friesian horses? It seems that Harry Witteveen never lost his love for those huge black hig-stepping horses of his native Friesland. It was with this “retirement” that cam a resurgence of that old fascination for the Friesian and with it, the love of competition that had marked his father, Sidonius. In 1986, Harry imported two Friesian geldings, Floris and Eelke, and one mare, Framkje. Framkje’s first four foals were all Ster mares and that was the beginning. 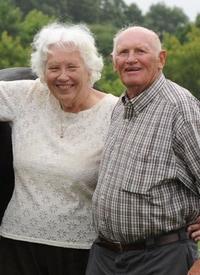 Once we became members of FHANA, we became involved. FHANA has always been veryimportant to us and we have promoted the Association to many people. From the start, we have gone to shows with our horses to promote the horses themselves, but definitely tp promote FHANA. We always had FHANA flyers around, ready to pass out to prospective members. 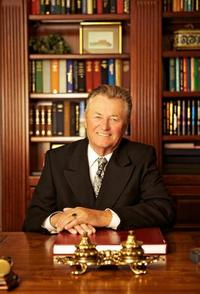 Fred DeBoer had a dream of bringing his native horse, the Friesian, to the United States in the 1980’s. In the last 25 years, he has accomplished his dream and established himself as one of the top Friesian breeders on the West Coast. Fred DeBoer, also known as Feike, was born in Freisland, Holland where the Friesian horse originated.