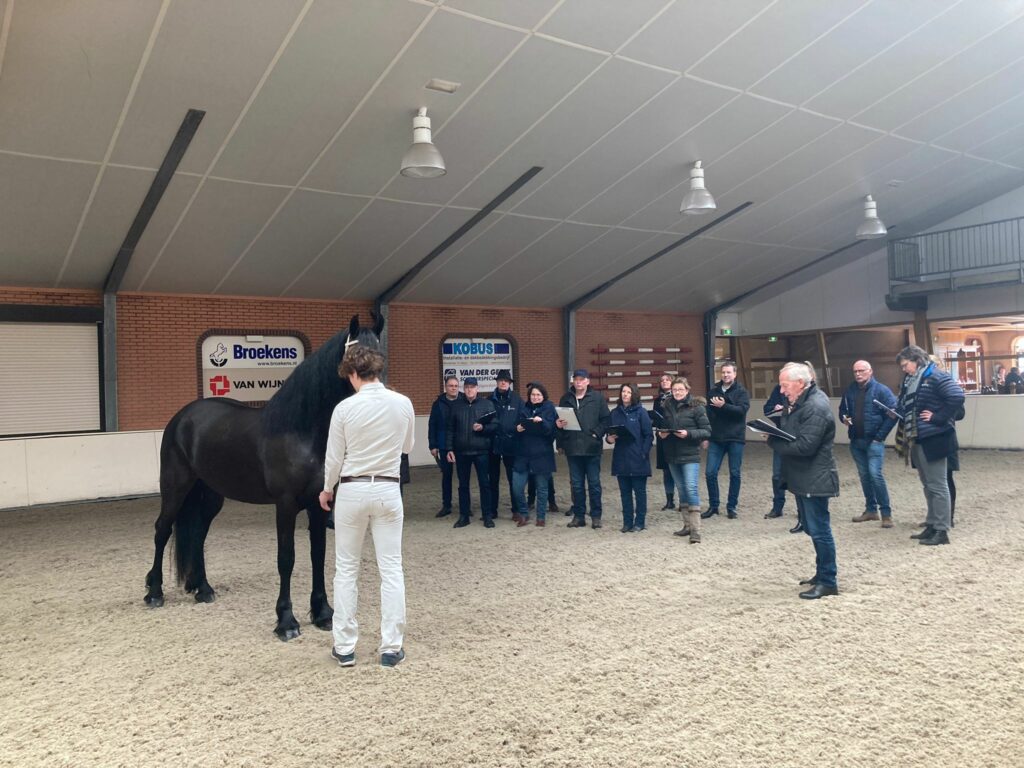 The KFPS Jury body gathered together for a standardisation meeting at Het Swarte Paert in Hemrik on Saturday the 26th of February. This day took place under the guidance of Arie Hamoen and serves as a preparation for the 2022 inspection season.

Picture of the horse
Under the auspices of Arie Hamoen the morning was used to practice linear scoring of a few horses. Several horses came into the ring: from Studbook- to Model mares, from 2½-year-olds to 17-year-old horses. Hamoen coached the Jury members towards a consensus about the method of inspecting and knew how to encourage the judges. By carrying out linear scoring you create as it were, a ‘picture of the horse’, he summarized.

Arie Hamoen, now retired, for years used to be a chief inspector of a cattle studbook and he was involved in the introduction of linear scoring for horses. That makes him the ultimate authority on linear scoring and therefore the obvious person to run this Jury day. ‘Judging will always be a people’s job’, Manager Inspection Affairs Greetje Swart points out. ‘In order to ensure uniformity in inspections it’s important to achieve standardization at the start of the season.’

Discussion foals and feet
In the afternoon groups were formed to discuss several statements and the judges engaged in debate to exchange their ideas. For the assessment of foals the discussion centered around the differences in movement of first- or second-premium foals. On this topic opinions varied, so this subject will be further elaborated on. Everybody agreed that if a foal happens to be lame the foal will not be inspected. This will be included as an amendment in the breeding- and selection policy of the KFPS. Incongruity of feet was also discussed. If the incongruity is substantial the horse will not be accepted in the Studbook, the Jury meeting concluded. The April issue of Phryso will feature an article with more information about the 2022 inspection season.