Each calendar year foal names must begin with specific letters of the alphabet as designated by the KFPS. Names should be relatively simple, ideally consisting of a single word. Farm names or initials are not allowed to precede a name, but may follow the name if approved by the KFPS. Names do not have to be Dutch.

Duplication of Names – Names of fillies cannot be duplicated exactly in the same year, although duplications are permitted on the names of colts. In most cases the KFPS will attempt to use the filly name as specified by the owner. However initials or additional names may follow the desired name. For example, Mrs. Smith’s mare, Lady, has had a filly and Mrs. Smith has selected the name “Amanda” for the filly. Unfortunately another filly has already been named Amanda. In this case the KFPS would name Mrs. Smith’s filly “Amanda S.” (for “Smith”). If there was already an Amanda S., the filly’s name might include the name of her dam, in this case making her name “Amanda Lady”. Owners who don’t want to leave the naming options up to the KFPS should list a second choice name on the Birth Announcement form.

Stallion Names and Numbers – When stallions are selected for breeding and become Approved Stallions they are renamed. The owners are given a list of Friesian names. The stallion’s new registered name is selected from the list and he will henceforth be known by his new name, even if he subsequently loses his breeding approval. At the time the stallion is entered into the Studbook for Stallions he is also assigned the next consecutive Studbook number. That number becomes part of his identification, for example Hearke 254, and is not the same as his registration number.

Name Changes – Once a name is processed by the KFPS, it cannot be changed. Subsequent owners who are unhappy with a horse’s name are free to call the horse something else, although the registered name has to remain unchanged. 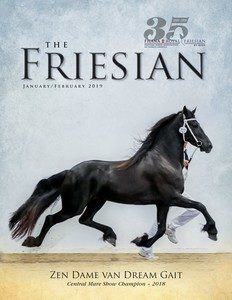