Top bred imported Ster mare.  She was bred by the famous Stal Synaeda.


This mare is sure to melt your heart, people are everything to her. She is smart talented and a great mover. She is trained under saddle. She does sometime shake her head when riding due to sessional changes. Selling as brood mare. This mare is very responsive and respectful not pushy and well mannered. Loads, ties, hotshoes, bathes, good with Spray bottles.

Tetta’s dam is out of the famous bred Pyrrha fan Synaeda, now a triple Preferent mare for her descendants.

Tetta’s sires is Norbert- one of the KFPS's most Elite breeding stallions.  Norbert has accomplished just about everything---  Multiple champion, Reserve Champion, horse of the yr, sport predicate and so on.  In 2012, 2013 and 2014 he won the title of Overall Champion at the Stallion show in Leeuwarden and in 2010 was Reserve Champion.  In 2013 he was awarded KFPS horse of the yr.  To add to his accomplishments he has sired 6 outstanding sons, Hessel 480 (which was reserve champion 2015) and Hette 481 (which was reserve champion 2014), Julius 486, Menne 496,  Rommert 498 and the newest  Matthys 504.  Norbert stems from a very well respected stamline 25 (1914).  His sire is the famous Preferent stallion Tsjerk P 328 X Hearke P 254.  Mother line just as impressive,  MP*4 x SP*6  & add to it Low in breeding.  Norbert obtained his sport title and is Z1 dressage w/ 15 points.  Not only an excellent dressage stallion but also a multiple winner in Harness.  Norbert has it all, outstanding accomplishments, top producer (64% Ster percentage), stems from great stamline, impressive papers, tall (16.2 hands), 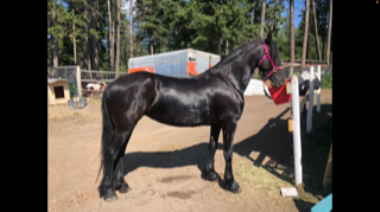 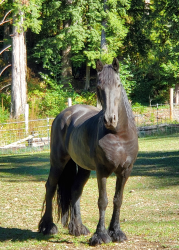