Zarine P.J., Crown is an extraordinary 16.1hh 2007 KFPS mare by Beart 411, Sport/Preferent and out of Anjo fan Beintemahus, Star/Sport by Ritse 322. Awarded 1st Premium and the Star predicate in 2010, the following year Zarine finished a strong Dressage IBOP at our FHANA Keuring with a 78% and was distinguished as a Crown mare. With her strong conformation, exquisite type, and powerful, correct gaits, she has been very successful in-hand, including being named Champion of the Day at our 2016 FHANA Keuring and placing 2nd in the Broodmare class at Dressage at Devon against all breeds.

She has been a wonderful producer for the ISF program with numerous top quality offspring. In 2015, her daughter Zambuca ISF was awarded 1st Premium and Champion Filly at her foal keuring. Zarine offers a rare opportunity to add a Crown mare to your Friesian breeding program and her price includes a breeding to an ISF Friesian stallion.

Sire Beart 411, Sport/Preferent received a 1A Premium at the 2005 Stallion Competition and was then World Champion at the 2006 Stallion Show in Leeuwarden. He was awarded the Sport predicate based on his successes in performance and has become a renowned producer of offspring with modern type, top gaits, and jet black coats. Beart 411’s production record includes numerous 1st Premium foals, keuring champions, and approved stallion sons including the ISF breeding stallion Tjalbert 460.

Zarine is out of the Star/Sport mare Anjo fan Beintemahus, a daughter of the stallion Ritse 322. Ritse 322 competed to the Z2 level in Dressage in the Netherlands and is the sire of the approved stallion Wikke 404.

For more details or to set up an appointment to meet Zarine P.J., please call (610) 383-4717 or email sales@ironspringfarm.com!

Zarine P.J. is negative for dwarfism. 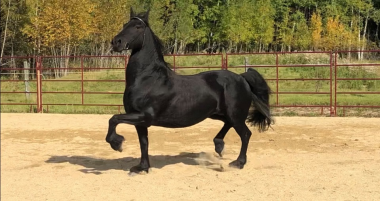 Stunning ster friesian mare , can be sold pregnant or not for a limited time 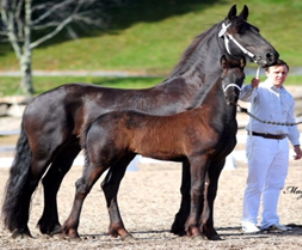 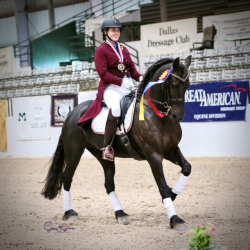