AVAILABLE IN-UTERO:
Out of imported mare Liske E Star*2 by Hessel 480 Sport (Norbert 444 x Jelke 367).  Sire is over 17hh
An opportunity to acquire some of the finest of KFPS bloodlines from the Netherlands.  Liske E is due on or about July 7, 2021. I have one contract available now, for a filly and one contract available now, if she has a colt.  This ensures that the buyer gets their desired gender.  This foal was bred for health, temperament; conformation and sport. Dam and Sire have tested NEGATIVE for dwarfism, hydrocephalus and the chestnut factor.  The dam's sire lived until 30 years old.  It's a very healthy line!  The sire Hessel 480 Sport just had 2 son's approved in November of this year!
Liske's filly from last year attended the inspection and earned Champion Filly at the Iron Spring Farm Keuring.   She marched into the arena and stood for evaluation in a beautiful pose for the judges.  She's gorgeous and tall.  When it came time to show us what she could do she didn't disappoint. The judges comments included "The racial type is good and this horse has an expressive head and also a long neck. The conformation is a good upper line, it's strong and also the connections are there and has quality feet and legs. The walk was alive and long and in the trot it was activity and a moment of suspension"   Your foals dam is an imported KFPS Main Studbook Star Mare, Liske E *2, daughter of the famous Elbricht MODEL-DOUBLE PREFERENT PRESTANTIE MOTHER (Crown Jewel *8),  She's the most predicated KFPS Mare in History ever sired by the legendary, Oege 267 Preferent and is among the Netherlands most cherished broodmares. Oege is referred to as the “Hair Man” and Liske E consistently produces long, full Oege/Anton manes and tails as well as multiple champions at the North American Keuring's. Dam grows a 4 foot long mane herself, so if you desire HAIR, this foal will “have it” in his/her bloodline. (Hessel 480 Sport x Ulke 338 Sport x Oege 267 Preferent (Model Double Preferent Prestatie Mother x Cobus 248 (from the rare Age 168 line). The motherline is exceptional and the producer of a VERY HIGH number of approved stallions. Your foal will certainly be an asset to enhance or start any breeding program. The rule of good breeding is to always start with an EXCEPTIONAL MOTHERLINE. Liske E has a FULL PAPER over the last 78 years, close to the inception of stam 44, and begins with Daetke M+P.  Within the motherline, Liske E’s sister gave birth to Olgert 445 Sport Elite, .  He competed at the highest level of dressage (Grand Prix) as well as driving and show driving. Olgert's 1st foal crop gave him an Approved son. Liske's other sister, Model mare Renske, had a daughter that gave birth to Fonger 478 Sport that was approved in 2014. Liske’s great great grandmother, Marriannke Star Preferent gave birth to Chrytzen 246. This motherline is bred for and is excelling in Sport!  Mares as well as the boys in this motherline are knocking it out of the park competing in dressage. They are not only earning their Sport predicate’s but competing at Grand Prix, Prix Saint George and 3rd Level (Z1). Dam, Liske E Star, is half way to Preferent herself on her first two offspring! She was bred to Mintse 386 Sport and her daughter (Ivanke CJF Star) earned KEURING DAY CHAMPION and CHAMPION MARE. She brought the following scores for trot: Length 107, Strength 108, Balance 106 and Elasticity 107 which is a score of 8. Additionally Liske's son by Mintse 386 Sport (Frans CJF Star) earned the STAR STALLION predicate in 2014. The Star Stallion predicate is rare and is only awarded to stallions that are judged to be “superior” in both conformation and movement. He is very rich in type and received an 8. Judge’s comments: “Very good trot, lots of power, bending, space and suspension”. This foal is out of the bloodline line of the accomplished Jan van’t Ende, breeder of generations of Elbricht’s in the Netherlands. Among them are multiple Breeder's Day (keuring) champions, multiple Sport Predicates; multiple champions in sport; the Sport Elite Predicate; Grand Prix dressage; Driving Champions as well as Approved Stallions. His mare Elbricht M+Px2+Pm was the first filly out of Tiete Star, Tiete was bred by the former MAIN INSPECTOR of the KFPS, Hendrik Draaier from Twijzel.  Liske E's sire, Ulke 338 Sport was the most successful showdriving horse in history.  His successes include four times National Champion Studbook Stallion in front of the sjees.  For breeding he has been of influenece as the sire of Olgert 445, the Grand Prix stallion that is the producer of top dressage horses, and grandson Fonger 478 Sport.  Moreover, he is the maternal sire of 5 Studbook stallions.   The dam, Liske E was a USEF/IFSHA National Horse of the Year Champion twice with an extensive winning show record spanning over many years.   Pictured are some of her offspring and all were 1 year old or younger when the photo's were taken.  This foal is offered for sale to a loving home that is also committed to presenting him/her at the adult KFPS inspection as a 3-5 year old.  Liske E is also for sale prior to having the foal.  Please contact me for the price.  Foal alone is priced above. 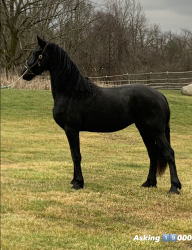 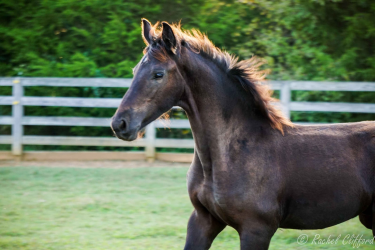 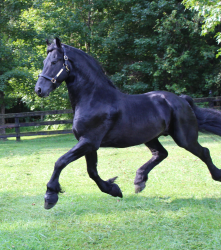